The international criminal court has persistently avoided opening an investigation into alleged war crimes in Gaza as a result of US and other western pressure, former court officials and lawyers claim.

In recent days, a potential ICC investigation into the actions of both the Israel Defence Forces and Hamas in Gaza has become a fraught political battlefield and a key negotiating issue at ceasefire talks in Cairo. But the question of whether the ICC could or should mount an investigation has also divided the Hague-based court itself.

An ICC investigation could have a far-reaching impact. It would not just examine alleged war crimes by the Israeli military, Hamas and other Islamist militants in the course of recent fighting in Gaza that left about 2,000 people dead, including women and children. It could also address the issue of Israeli settlements in the Palestinian territories, for which the Israeli leadership would be responsible.

The ICC’s founding charter, the 1998 Rome statute (pdf), describes as a war crime « the transfer, directly or indirectly, by the occupying power of parts of its own civilian population into the territory it occupies ».

Also at stake is the future of the ICC itself, an experiment in international justice that occupies a fragile position with no superpower backing. Russia, China and India have refused to sign up to it. The US and Israel signed the accord in 2000 but later withdrew.

Some international lawyers argue that by trying to duck an investigation, the ICC is not living up to the ideals expressed in the Rome statute that « the most serious crimes of concern to the international community as a whole must not go unpunished ».

John Dugard, a professor of international law at the University of Leiden, in the Netherlands, and a longstanding critic of Israel’s human rights record, said : « I think the prosecutor could easily exercise jurisdiction. Law is a choice. There are competing legal arguments, but she should look at the preamble to the ICC statute which says the purpose of the court is to prevent impunity. »

In an exchange of letters in the last few days, lawyers for the Palestinians have insisted that the ICC prosecutor, Fatou Bensouda, has all the legal authority she needs to launch an investigation, based on a Palestinian request in 2009. However, Bensouda is insisting on a new Palestinian declaration, which would require achieving elusive consensus among political factions such as Hamas, who would face scrutiny themselves alongside the Israeli government. There is strong US and Israeli pressure on the Palestinian leader, Mahmoud Abbas, not to pursue an ICC investigation.

Western pressure on the ICC to stay away from the issue has caused deep rifts within the prosecutor’s office. Some former officials say the Palestinians were misled in 2009 into thinking their request for a war crimes investigation – in the wake of an earlier Israeli offensive on Gaza, named Cast Lead – would remain open pending confirmation of statehood. That confirmation came in November 2012 when the UN general assembly (UNGA) voted to award Palestine the status of non-member observer state, but no investigation was launched.

Bensouda initially appeared open to reviewing the standing Palestinian request, but the following year issued a controversial statement (pdf) saying the UNGA vote made no difference to the « legal invalidity » of the 2009 request.

Luis Moreno Ocampo, who was prosecutor at the time of the Palestinian 2009 declaration, backed Bensouda, saying in an email to the Guardian : « If Palestine wants to accept jurisdiction, it has to submit a new declaration. »

But another former official from the ICC prosecutor’s office who dealt with the Palestinian declaration strongly disagreed. « They are trying to hiding behind legal jargon to disguise what is a political decision, to rule out competence and not get involved, » the official said.

Dugard said Bensouda was under heavy pressure from the US and its European allies. « For her it’s a hard choice and she’s not prepared to make it, » he argued. « But this affects the credibility of the ICC. Africans complain that she doesn’t hesitate to open an investigation on their continent. »

Moreno Ocampo took three years to make a decision on the status of the 2009 Palestinian request for an investigation, during which time he was lobbied by the US and Israel to keep away. According to a book on the ICC published this year, American officials warned the prosecutor that the future of the court was in the balance.

According to the book, Rough Justice : the International Criminal Court in a World of Power Politics, by David Bosco, the Americans suggested that a Palestine investigation « might be too much political weight for the institution to bear. They made clear that proceeding with the case would be a major blow to the institution. »

Although the US does not provide funding for the ICC, « Washington’s enormous diplomatic, economic and military power can be a huge boon for the court when it periodically deployed in support of the court’s work, » writes Bosco, an assistant professor of international politics at American University.

In his book, Bosco reports that Israeli officials held several unpublicised meetings with Moreno Ocampo in The Hague, including a dinner at the Israeli ambassador’s residence, to lobby against an investigation.

A former ICC official who was involved in the Palestinian dossier said : « It was clear from the beginning that Moreno Ocampo did not want to get involved. He said that the Palestinians were not really willing to launch the investigation, but it was clear they were serious. They sent a delegation with two ministers and supporting lawyers in August 2010 who stayed for two days to discuss their request. But Moreno Ocampo was aware that any involvement would spoil his efforts to get closer to the US. »

Moreno Ocampo denied that he had been influenced by US pressure. « I was very firm on treating this issue impartially, but at the same time respecting the legal limits, » he said in an email on Sunday. « I heard all the arguments. I received different Oxford professors who were explaining the different and many times opposing arguments, and I concluded that the process should … go first to the UN. They should decide what entity should be considered a state. »

He added : « Palestine was using the threat to accept jurisdiction to negotiate with Israel. Someone said that if you have nine enemies surrounding you and one bullet, you don’t shoot, you try to use your bullet to create leverage. »

A spokeswoman for his successor, Fatou Bensouda, rejected allegations of bias in the prosecutor’s choice of investigations. « The ICC is guided by the Rome statute and nothing else, » she said. « Strict rules about jurisdiction, about where and when ICC can intervene should be not be deliberately misrepresented … Geographical and political consideration will thus never form part of any decision making by the office. »

The French lawyer representing the Palestinians, Gilles Devers, argued that it was for the court’s preliminary chamber, not the ICC’s prosecutor, to decide on the court’s jurisdiction in the Palestinian territories. Devers said negotiations were continuing among the Palestinian parties on whether to file a new request for an investigation, even though he believed it to be unnecessary in legal terms. Ultimately, he said, the outcome would be determinedly politically.

« There is enormous pressure not to proceed with an investigation. This pressure has been exerted on Fatah and Hamas, but also on the office of the prosecutor, » Devers said. « In both cases, it takes the form of threats to the financial subsidies, to Palestine and to the international criminal court. »

Among the biggest contributors to the ICC budget are the UK and France, which have both sought to persuade the Palestinians to forego a war crimes investigation. 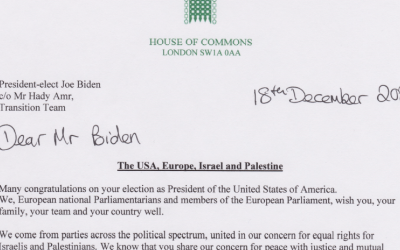