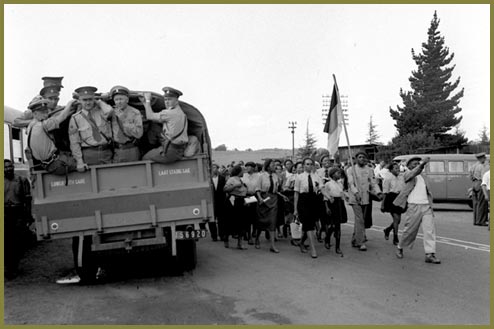 The state of Israel was created in 1948, the same year that the racist apartheid regime was implemented in South Africa. In the 1960s a political and military alliance developed between the two countries, deepening following Israel’s occupation of the Palestinian West Bank, Gaza, and East Jerusalem, and the Syrian Golan Heights, in the June 1967 War.

In the 1970s, Israel’s government under Prime Minister Yitzhak Rabin forged close ties with South Africa’s apartheid regime. One of the architects of this alliance was then-Defense Minister and current President Shimon Peres. While Peres frequently condemned apartheid publicly, behind the scenes he was instrumental in creating an alliance that helped keep the apartheid regime afloat while the rest of the world was increasingly turning against it in revulsion at its racist policies. In November 1974, following a secret visit to Pretoria, Peres wrote to South African officials praising the “vitally important” link he had helped establish between the two countries and highlighting that “this cooperation is based not only on common interests and on the determination to resist equally our enemies, but also on the unshakeable foundations of our common hatred of injustice and out refusal to submit to it.”

In 1975, a « Joint Secretariate for Political and Psychological Warfare » was created to facilitate the apartheid South Africa-Israel alliance, including "propaganda and psychological warfare,” part of a $100 million South African propaganda campaign to rehabilitate the country’s image internationally. According to a report from NBC News : “Under terms of the agreement, championed by Peres, then Defense Minister, and Yitzhak Rabin, the Prime Minister, Israel would help South Africa burnish its international reputation. South Africa would supply the money, with each country appointing a secretary to look after its interests.

In 1976, South African Prime Minister John Vorster, who was imprisoned by the British during World War II for pro-Nazi activities, was given a red-carpet welcome in Israel. At a state dinner, Prime Minister Rabin praised Vorster for creating a “prosperous atmosphere of cooperation” between their two countries.

Regarding the affinity between the two regimes, Israeli army chief of staff General Rafael Eitan, who would go on to serve as Agriculture and Environment Minister and as a Deputy Prime Minister during Benjamin Netanyahu’s first term as prime minister (1996-1999), explained that blacks in South Africa “want to gain control over the white minority just like the Arabs here want to gain control over us… And we, like the white minority in South Africa, must act to prevent them from taking over.”

While Israel and South Africa’s apartheid regime worked closely together, the African National Congress (ANC) under Nelson Mandela and the Palestine Liberation Organization (PLO) under Yasser Arafat also developed close ties in their anti-colonial struggles. An outspoken supporter of Palestinian rights, in 1997 Mandela declared : “We know too well that our freedom is incomplete without the freedom of the Palestinians.” Shortly after being released from prison in 1990, Mandela remarked : “The people of South Africa will never forget the support of the state of Israel to the apartheid regime.”

In addition to the political alliance, the Israeli and apartheid South African militaries also developed a close alliance. Israel supplied the South African regime with military advisors and weapons, and the two armed forces trained together. The two governments also cooperated in their fights against the ANC and PLO.

In the 1960s, Israel and South Africa began to cooperate in the development of nuclear weapons. By the 1970s both countries had manufactured the bomb. Again, Shimon Peres, as the architect of Israel’s nuclear program, played a key role, building a secret agency called the Science Liaison Bureau whose mission was to collect nuclear technology. In 1975, Peres was involved in an offer to sell South Africa advanced Jericho missiles, which could have been equipped to carry nuclear warheads.

As in apartheid South Africa, Israel classifies its citizens according to ethnicity and privileges one group over all others. Today, there is a de facto caste system within the territories that Israel controls between the Jordan River and the Mediterranean Sea. At the top are Israeli Jews, while Muslim and Christian Palestinians in the occupied West Bank and Gaza are at the bottom. Between them are Palestinian citizens of Israel and Palestinian residents of occupied East Jerusalem. Each has different rights according to the regime Israel has implemented, with Jews enjoying the full benefits of democracy in a “Jewish state,” and Palestinians living in the occupied West Bank and Gaza accorded no political rights whatsoever, being ruled by Israeli military decree.

In apartheid South Africa, blacks weren’t allowed to vote for the national government. While Palestinian citizens of Israel can vote in Israeli elections, millions of Palestinians in the occupied territories cannot, even though Israel has ruled them for almost half a century.

In apartheid South Africa, the government used a complex pass system to control the movement of blacks, while Israel has instituted an elaborate permit and checkpoint system to control Palestinian movement in the occupied territories.

In South Africa, blacks were forced into bantustans where they were more easily controlled by the apartheid regime. Israel has divided the occupied territories into several isolated territorial units, cut off from one another and from the outside world and surrounded by walls and checkpoints, so that the Israeli army can more easily control the Palestinian population. Meanwhile, within Israel’s internationally recognized pre-1967 borders, approximately 93% of the land is state-owned and controlled by the Israel Land Authority and quasi-governmental agencies like the Jewish National Fund, which systematically discriminate against non-Jewish citizens in its allocation. Combined with private discriminatory rental policies, Israeli government policies have ensured a concentration of the non-Jewish Arab population into several geographically constricted, overcrowded and underserviced ghettos.

In apartheid South Africa there were whites-only areas, while inside Israel there are more than 300 rural Jewish-majority towns that under Israeli law can reject residents who do not meet a vague “social suitability" standard. Critics, including Human Rights Watch, have slammed the law as an attempt to allow Jewish towns to keep Arabs and other non-Jews out. In the occupied Palestinian territories, Israel has built a network of Israeli-only roads that Palestinians are barred from traveling on, while Jewish settlers living right next door in exclusive housing can use them.

IS ISRAEL AN APARTHEID STATE ?

The 2002 Rome Statute of the International Criminal Court defines apartheid as « an institutionalized regime of systematic oppression and domination by one racial group over any other racial group or groups and committed with the intention of maintaining that regime. »

Over the entirety of its 65-year existence, there has been a period of only about one year (1966-67) that Israel has not ruled over large numbers of Palestinians to whom it granted no political rights simply because they are not Jewish. Prior to 1967 and the start of Israel’s occupation of the West Bank, East Jerusalem, and Gaza, Palestinians who remained inside what became Israel in 1948 were ruled by martial law for all but one year, similar to the way that Palestinians in the occupied territories have been ruled ever since.

Inside Israel there are more than 50 laws that privilege Jews or discriminate against non-Jewish Palestinian citizens, affecting everything from immigration and family reunification to land ownership rights. In the occupied territories, Palestinians have lived under a brutal and repressive Israeli military regime for more than 46 years while Jewish settlers protected by the Israeli army colonize their land and lord it over them. In the words of a 2010 Human Rights Watch report entitled « Separate and Unequal : Israel’s Discriminatory Treatment of Palestinians in the Occupied Palestinian Territories” : »Palestinians face systematic discrimination merely because of their race, ethnicity, and national origin, depriving them of electricity, water, schools, and access to roads, while nearby Jewish settlers enjoy all of these state-provided benefits… While Israeli settlements flourish, Palestinians under Israeli control live in a time warp - not just separate, not just unequal, but sometimes even pushed off their lands and out of their homes.”

Many veterans of the anti-apartheid movement in South Africa consider Israel’s treatment of Palestinians to be a form of apartheid. One of the most outspoken voices has been that of Archbishop Emeritus Desmond Tutu, one of the heroes of the struggle against South African apartheid. Tutu has repeatedly made the comparison, writing in 2012 that Israel’s version of apartheid is actually worse than South Africa’s, stating : “Not only is this group of people [Palestinians] being oppressed more than the apartheid ideologues could ever dream about in South Africa, their very identity and history are being denied and obfuscated.” In June 2013, the recently retired South African ambassador to Israel, Ismail Coovadia, wrote that Israel’s treatment of Palestinians is a « replication of apartheid. »

One of the first people to use the word “apartheid” in relation to Israel was Israel’s first prime minister, David Ben Gurion, who warned following the 1967 War of Israel becoming an “apartheid state” if it retained control of the occupied territories. In 1999, then-Israeli prime minister and current defense minister Ehud Barak stated : « Every attempt to keep hold of [Israel and the occupied territories] as one political entity leads, necessarily, to either a nondemocratic or a non-Jewish state. Because if the Palestinians vote, then it is a binational state, and if they don’t vote it is an apartheid state.” In 2010, Barak repeated the apartheid comparison, stating : »As long as in this territory west of the Jordan river there is only one political entity called Israel it is going to be either non-Jewish, or non-democratic… If this bloc of millions of Palestinians cannot vote, that will be an apartheid state." 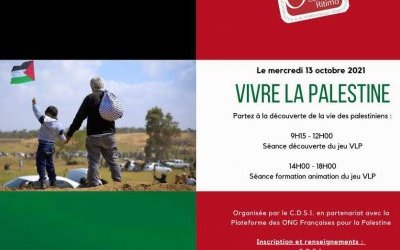 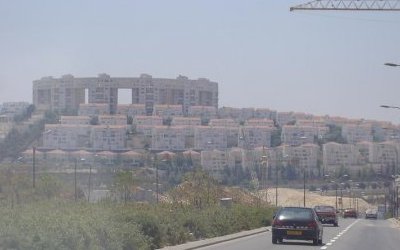 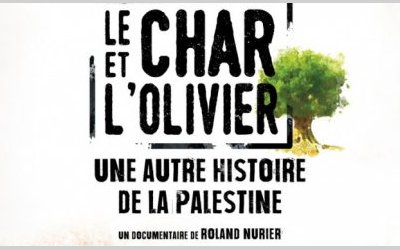